I always remember seeing the Centre Parcs adverts as a kid and being amazed that there were these magical huge glass covered villages somewhere. I was pretty convinced that the whole village was under a giant greenhouse; essentially the Eden project for holidays! I thought they looked great, although there was alot of bike riding in the adverts and I couldn’t ride a bike until my now husband taught me at the grand old age of 23, so I wasn’t sure how I would get around the greenhouse forest. Well, it took till I was 30 and have three children of my own, but I’ve finally been!

We travelled to Whinfell Forest in Cumbria last week for a Monday-Friday break. Our friends, and their family of three, were also there at the same time and we picked our lodge so we could be neighbours for the week! It was lovely to see them all for an extended time and Whinfell is perfectly placed in between Manchester and Edinburgh for a relatively easy commute for us both.

We arrived just after 3pm and immediately joined the check-in queue. We seemed to have times it well and were inside the park relatively quickly. After dropping all our stuff off at the lodge, we all drove back up to leave the car for the week as the girls wanted to try out the Adventure playground they had spotted on the way in.

After a bit of help the first time, they soon got the hang of climbing up to the smaller of the two large slides. It was a great play park with lots of different equipment and the larger pieces were big enough for adults to go on top to help smaller children. It’s also all made of wood and I love wooden playgrounds! 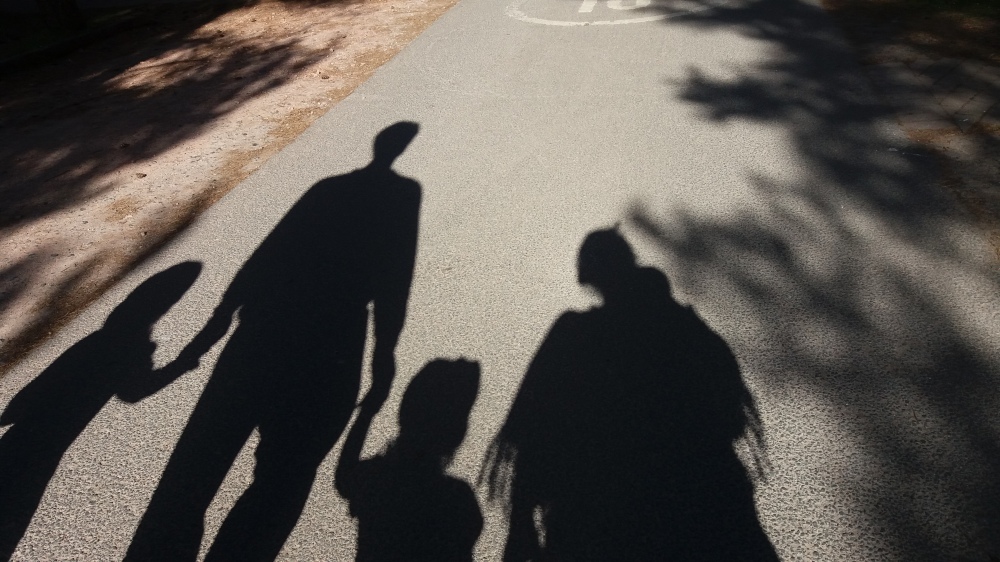 After heading back to the lodge for dinner, we had a wander around to get our bearings before bedtime. We had a look at the village centre under it’s glass dome. Although it doesn’t cover the entire village as imagined by my younger self, it is still rather impressive in size. There are shops, restaurants and the subtropical swimming pool inside.

The blackboard in lodge was a great hit with the big girls and I used it for some sneaky home ed on the road too! I put up the day of the week and the main activities of the day. S copied out the words on Tuesday and we read them out together for the other days. 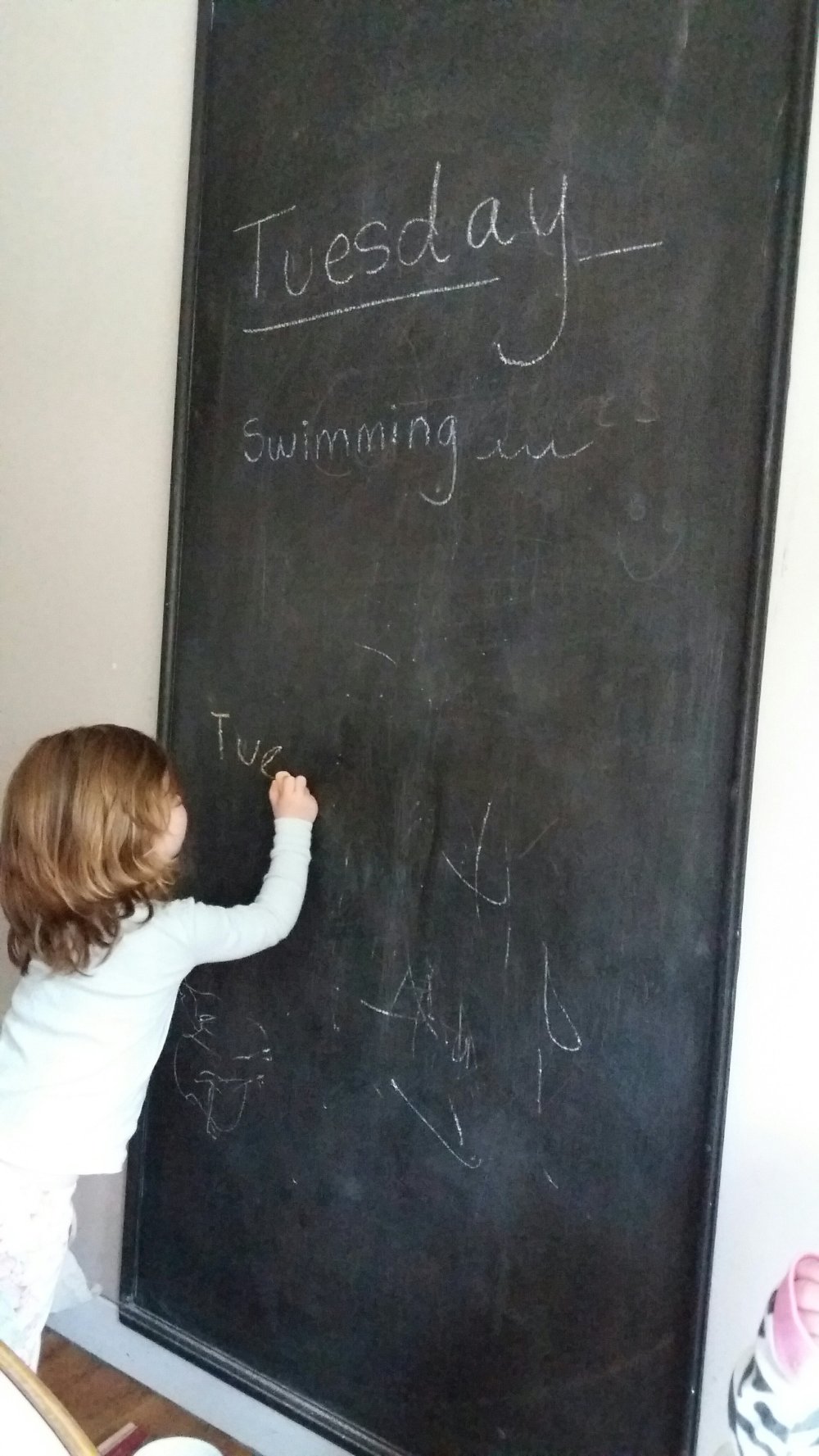 We went up to the swimming pool early for the baby dolphins session at 9.30am, before the main pool opens at 10am. The little pool was great with slides and the girls had a blast going down them over and over and over again! S enjoyed the wave pool and was jumping over the waves or bring splashed as they came in on the shore. We visited the pool everyday we were there and it was a great activity included in the price of the break.

The afternoon was spent walking in the woodland and then a BBQ tea. I had brought disposable ones with us, but we picked up some marshmallows at the supermarket for a fun dessert for the children…and adults!

I had pre-booked the baby owls activity before we arrived for the Wednesday afternoon. It was really interesting and the children all loved it. S keeps telling me the things she learnt and asking more questions about owls since. The presenter was great with the children and adults too. There were four owls on display and the children were able to stroke one and hold the another using a glove.

The little toadstool seats were adorable and i’m tempted to make something similar for our house!

On Thursday, we decided to go bowling first thing rather than swim as we had the other two days. It’s the first time we have taken the girls bowling and they really enjoyed it. We will go again sometime soon I think. A won and I came last! Despite losing interest slightly in the middle A carried on and saw it through to get victory. Her ability to concentrate and stick with things is improving. S was not upset at not coming first, a great improvement as some of our previous board games have ended in tears and a less than gracious loser!

There was a small sandy beach area near the edge of the lake and we spent a while playing in the sand and making castles. I had brought some of our sand toys with us as I had read about the beach before we came. The girls all enjoyed it and K played for at least 5 minutes before trying to eat all the sand.

The area behind our lodge was a great place for the kids to explore independently with easy supervision from a safe distance. 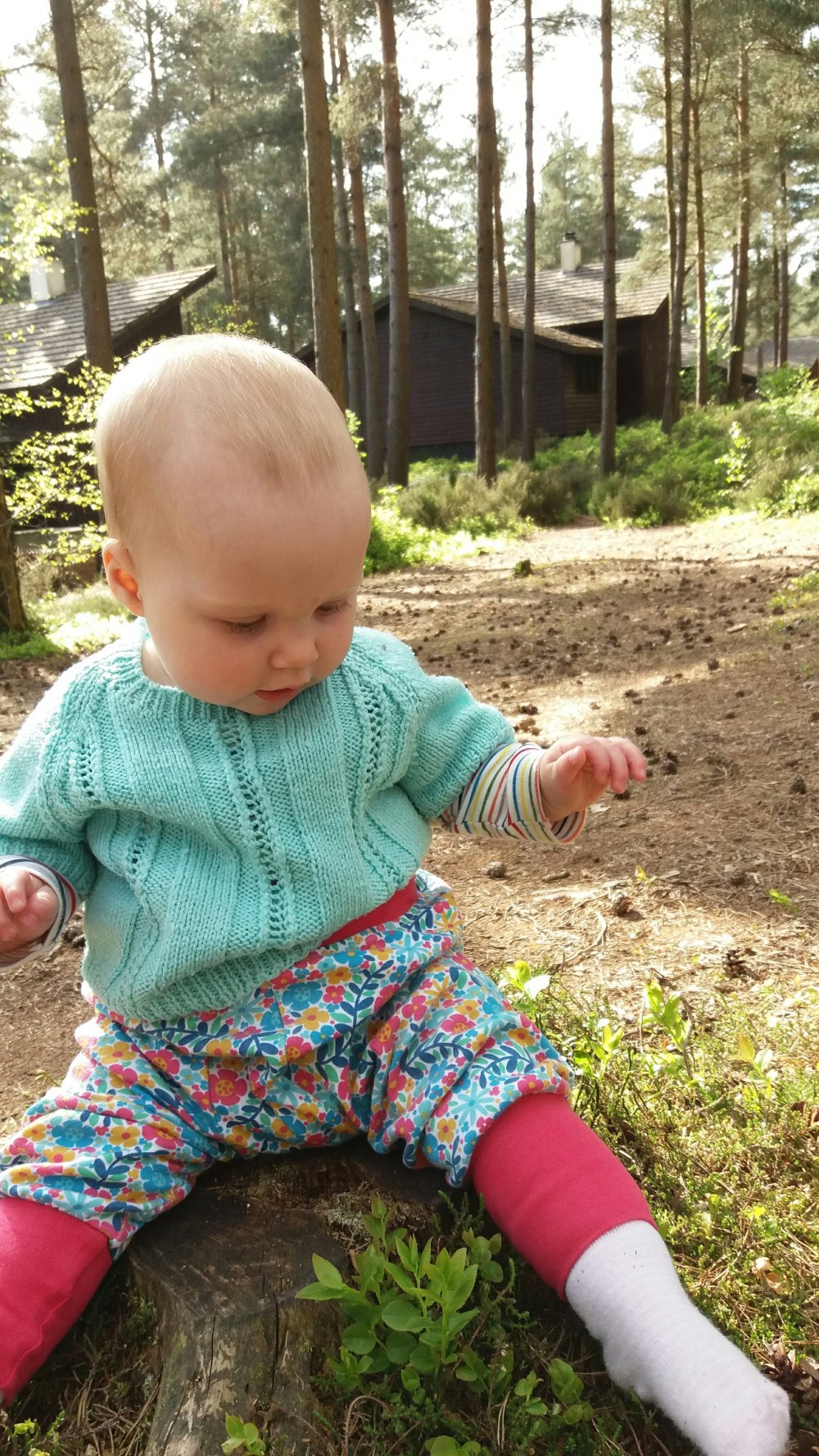 K enjoyed the textures of the ground, but I had to jump in to stop her trying to eat a handful of forest floor!

We had great fun watching the neighbourhood pheasant pair, who regularly came to snack on the bird food our friends had brought. If we come again I will definitely remember to bring some with us!

On Friday we packed up the car and left it at the car park while we went swimming for a final time. After swimming we decided to have lunch at the Pancake house. It was still busy, but we got a table after 5 minutes, compared to the advised 40 minutes wait the day before (We decided to have sandwiches at home instead on Thursday!). The pancakes were lovely and I was glad I got K her own as she polished off a whole kids pancake! The kids meals were a good deal; a pancake, milkshake and a dessert for just over £7. We headed off home and after a gloriously sunny week it started to rain as we hit the motorway.

It was a great week as a family and catching up with friends! 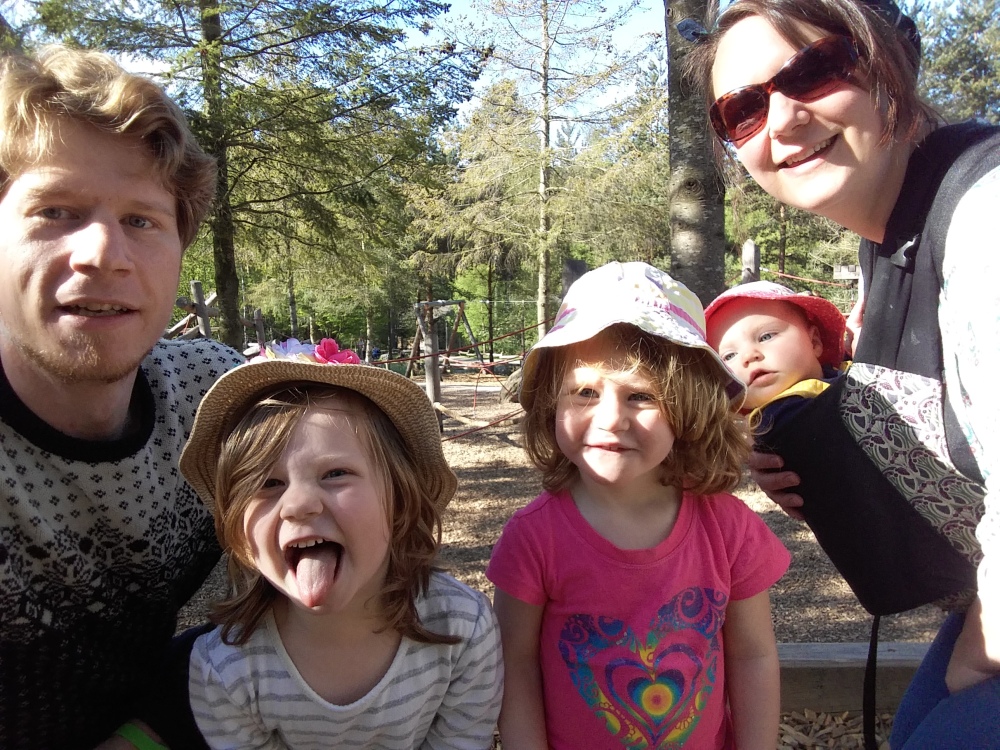