I recently got the Usborne First illustrated Maths dictionary to add to our bookshelf and to begin introducing more maths concepts to the girls.

S has been flicking through the book by herself since it arrived at the weekend and asking us to read or explain parts she was interested in. This morning before breakfast (or a fortifying cup of tea!), she asked me all about the 3D shape page.

I had a sort through our blocks and other toys for some 3D shapes. Our Grimm’s rainbow balls and the cone from our Grapat ‘Nins in the woods’ came in handy! I explained that 3D shapes have thickness and how 3D shapes were made up of 2D shapes. The page showing 2D nets for making 3D shapes really interested, so I said we could make some after breakfast.

I got the printable nets from this site and printed them on different coloured paper because who doesn’t love a rainbow! 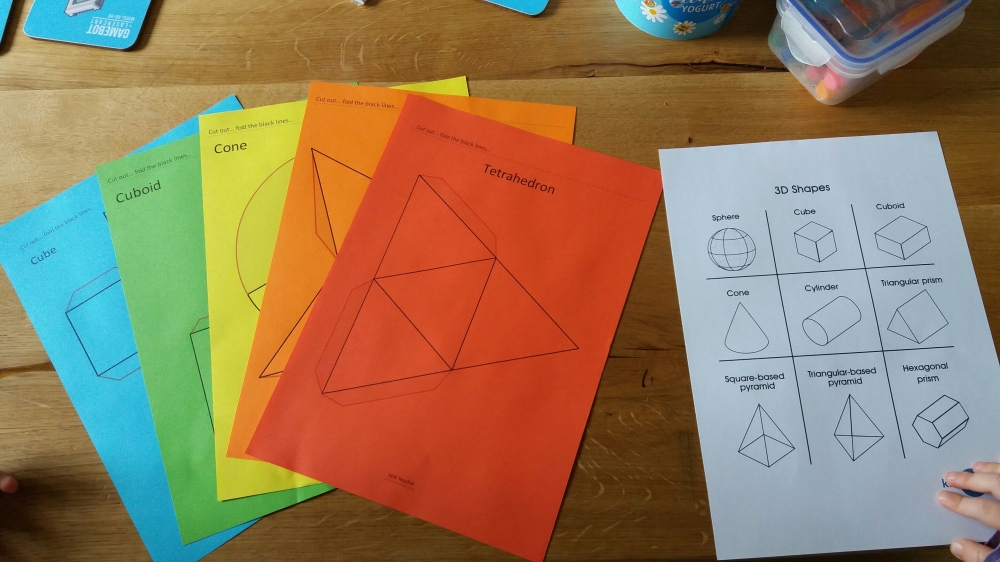 We talked about the 2D shapes that made up the various faces of the shapes and write the shapes names in them. I cut them out as S wanted to concentrate on writing and A helped me stick them together with double sided tape.

A played with the finished shapes and they had were talking to each other and all sorts; she has an amazing imagination!

We had fun with 3D shapes and I look forward to exploring the next concept the girls pick from the book. Hopefully I will get my cup of tea first next time!