My plan is to do a weekly round-up on a Sunday of what we have been up to during the previous week. I’m hoping it will give me a good overview of what we have been doing to look back on without the overload of posting everyday. I have been still updating our #100daysofhomeed on Instagram and I like the visual overview that gives me. It also helps to connect with other home edders on Instagram and see what they are up!

On Sunday, I popped up to the allotment for the first time this year. The girls stayed home with Mr S to play Paper Mario Colour splash, a game on the Wii that they have been playing together. I got lots tidied up and planted some onions. It was a lovely couple of hours of me-time and great to recharge the batteries. Probably not everyone’s idea of relaxing afternoon, but I love being outside gardening when the weather is lovely!

On Monday we met up with friends in the park for a picnic. The kids had a great time together and played lots of games with various sticks as props. It was lovely to see them free and uninhibited outside. I completely forgot to take any pictures of the action, so I had to take a quick picture of the girls muddy shoes for our Instagram update!

We started Tuesday with the home ed PE class which started last week. The classes have been made up of lots of fun games with running and ball skills. The girls really engaged with it, especially S who enjoys structured activities. A needed some encouragement last week, but settled much quicker this week and was fully committed to running as fast as she could!

Wednesday would usually be a day for our regular home ed meet, but with it being the schools’ Easter break there is no meet-up for a couple of weeks. We had a quiet day pottering around at home and in the garden. I set up the sandtable with new sand and some bits and pieces of loose parts I ordered from Baker Ross. The girls weren’t that interested in the day, but I’m hoping they’ll come back to it.

In the afternoon S asked to ‘do something’, her request when she wants me to do something sit down at the table and either academic or craft based. I got out the CBeebies magazine I had stashed ready for such occasions! S wanted to complete the alphabet activity and A picked the numbers poster. They stuck in the stickers and we talked about the numbers/letters. A did some colouring  and, although it’s not the neatest, she copied the colours in the example to colour in. Both girls rediscovered the duplo too as we’ve had it away in favour of wooden blocks and figures over the last couple of months.

We had another home/garden day on Thursday as I was trying to get our decking painted while the weather was dry and K was asleep. S and A came out with a word book that they used alot as toddlers to learn the words for various animals and items around them. They used the ‘In the garden’ page and tried to find the things on it in the garden. I suggested that S could use the book to label things with their word. She read out the letters for sandpit for me to write and then labelled some other things in the garden herself. 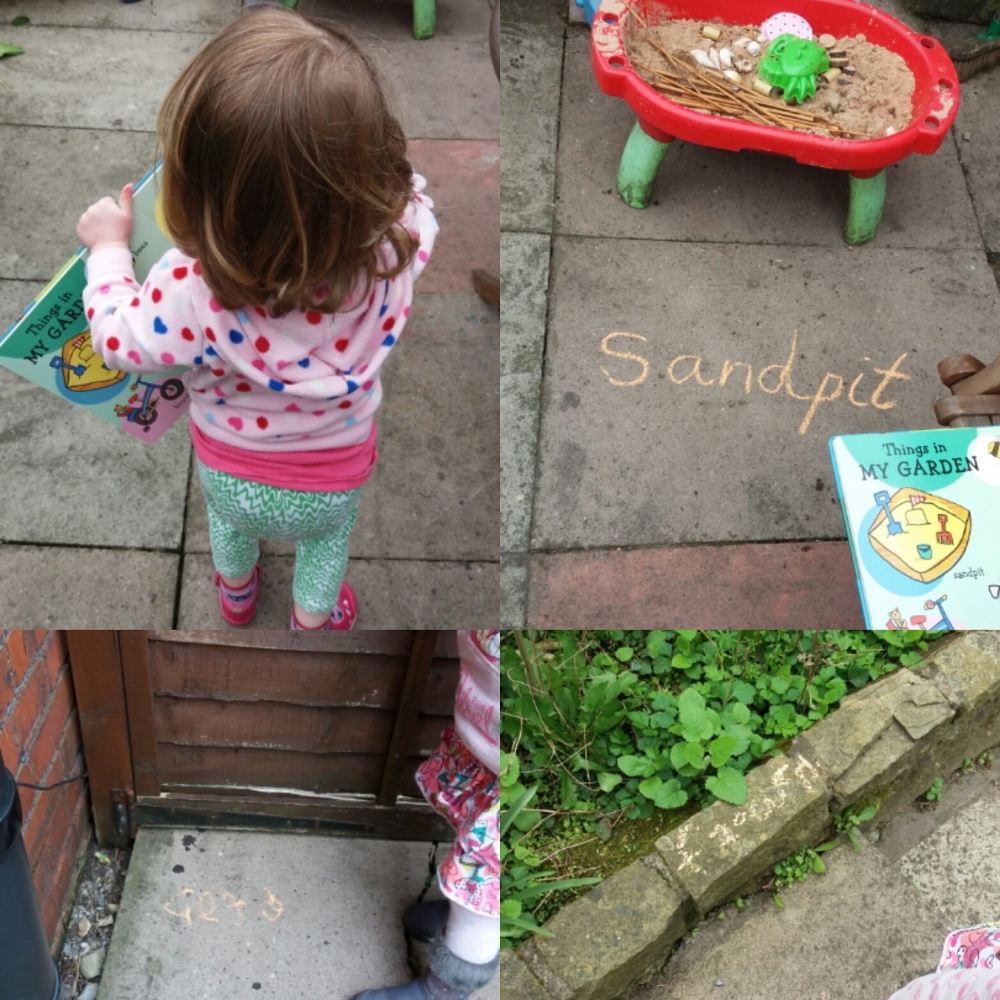 S asked me about pollination and bees and this led to a discussion about the inside of a flower. We pulled apart a daffodil from the garden to look at the parts inside; discussing where the pollen was, where it goes and the parts that will become seeds. They enjoyed getting hands on and feeling the various parts, especially the ovules which will become the seeds.  I showed them a diagram from a children’s gardening book we have too. A was inspired to draw a flower and copied one I had drawn for her.

Our bee saver kit from Friends of the Earth arrived too and we will be using that later to identify some bees!

I got lots of household jobs done on Friday while S and A were at the childminders. It was K’s last baby massage session this week and it has been lovely to take the time out concentrating on her. She looks so funny in her ‘graduation’ photo! I need to find another activity for us now to do together; I’m thinking baby sensory if I can find a class on a Friday. 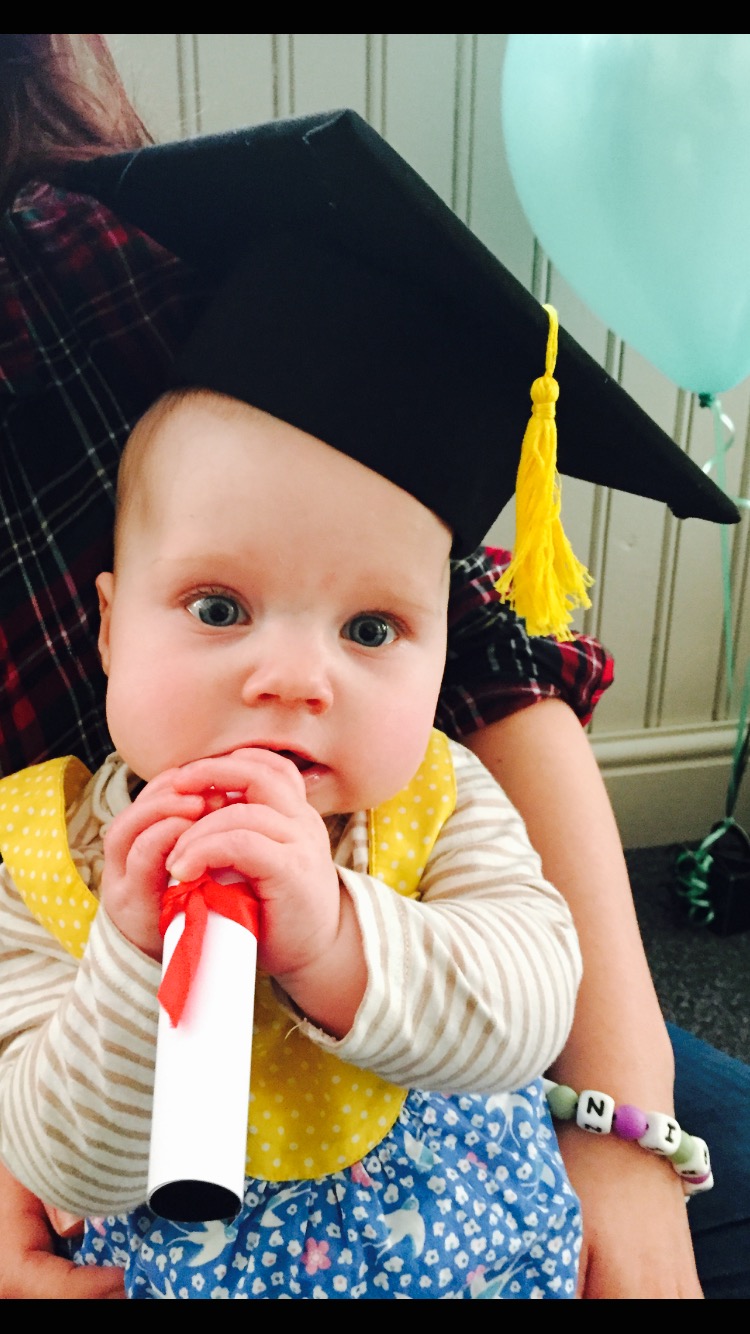 The weekend has been glorious, both sunny and warm. We have spent almost all of it outside in the garden I think!

Mr S explained all about pressure using his bicycle pump after the girls asked him about it as he was doing a little bicycle maintenance. He is very good at explaining and demonstrating concepts to them. If we do go ahead with home ed ‘officially’ in September then it will definitely be a team effort, even if I will be home (or most likely out!) with the children during traditional school hours! 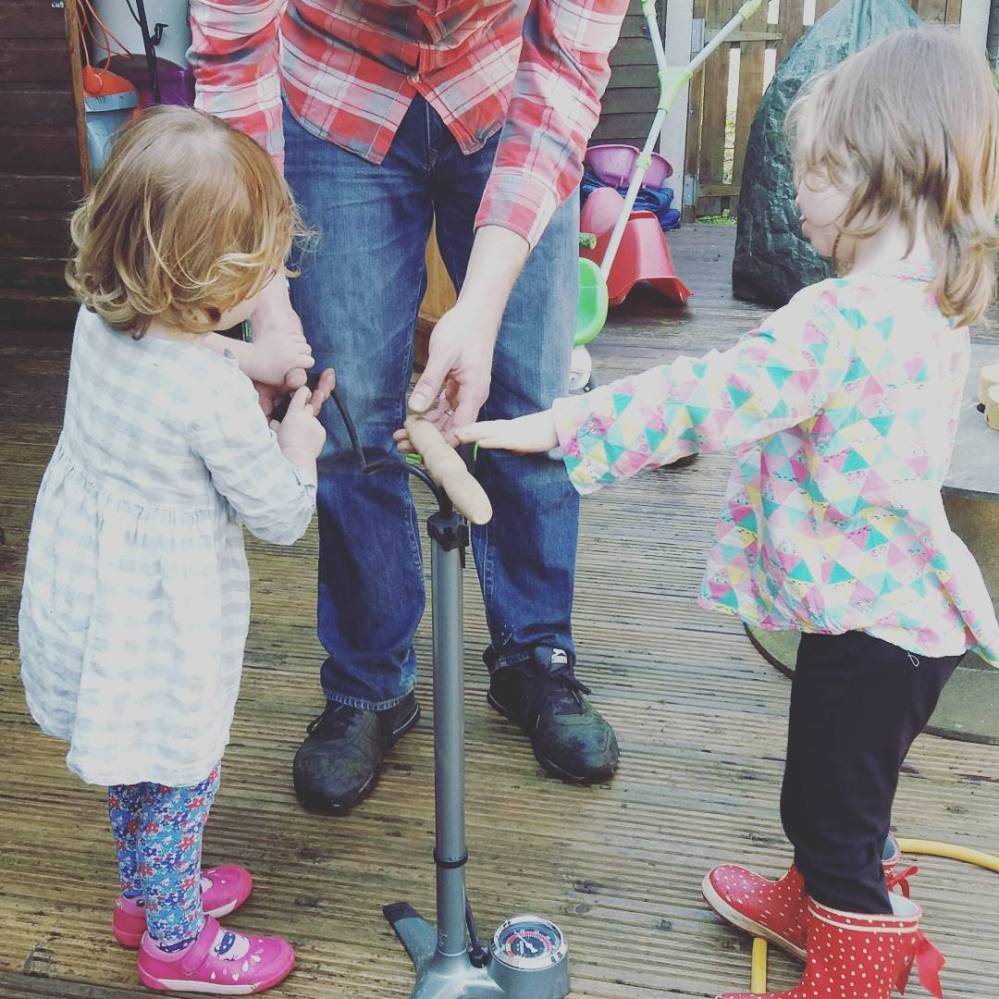 We planted wildflower seeds in the garden from our bee saver kit and spotted bees in the garden. We used the bee chart to try and identify them. I think we spotted an ivy mining bee on the wall and various types of bumble bee visiting some flowers on the patio. We built a little bee hotel together and organised the tubes which make it in size order in a sneaky bit of maths! 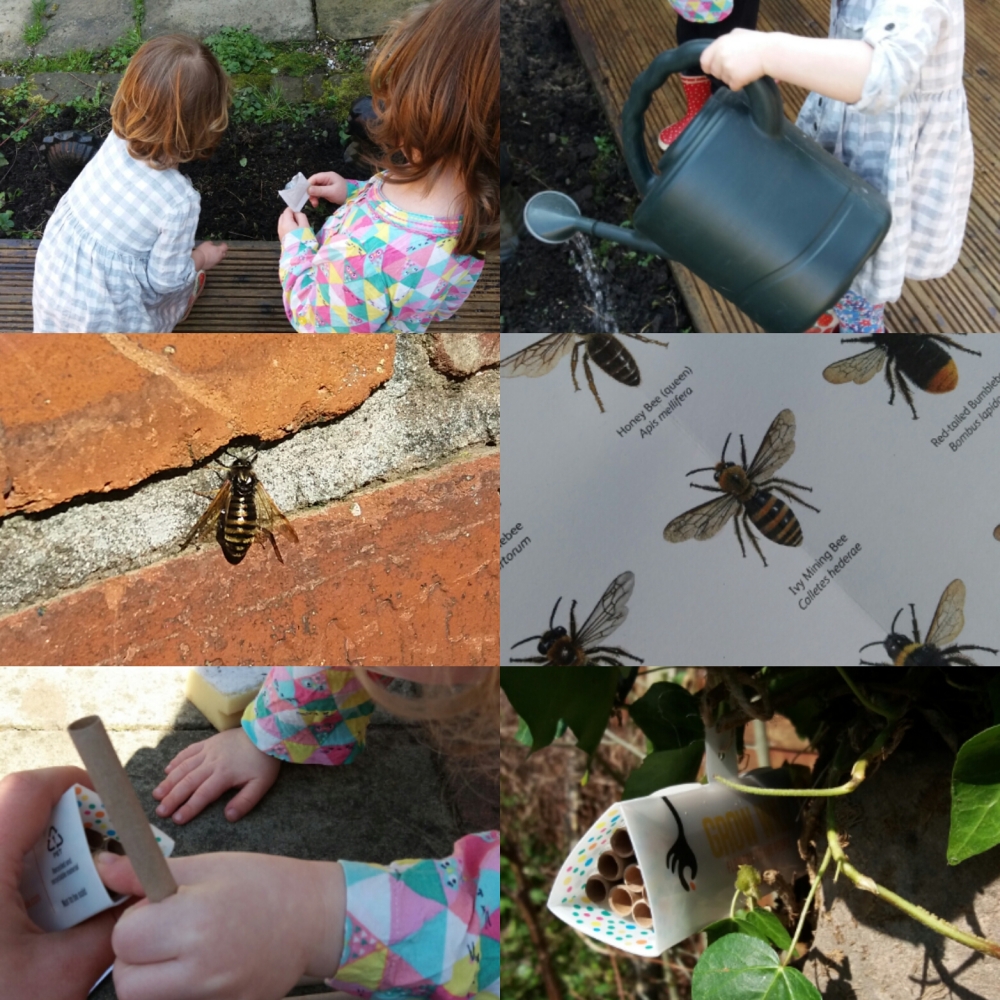 This Sunday was Palm Sunday and after church in the morning we made palm crosses. I had to find a quick Youtube video on how to do it, but I had plenty of practice now as A undid her several times so i had to fix it! S copied me as I showed her the steps. We coloured in Easter calenders covering the events of Easter week from Baker Ross and stuck them together. S also completed the worksheet I picked up from church. She liked deciphering the code section and I might do more coded messages for her at a later date.

Well that was our week! I hope you all had a great week too.

We will be decorating Easter eggs this week for the parish Easter egg competition on Sunday. We will also be dying hard boiled eggs and making Easter cookies; two Greek Easter traditions we have inherited from Mr S’s family. It’s Mr S’s birthday at the weekend and we have a Bbq planned, so fingers crossed for nice weather!